There are two basic forms of liquidation preferences: “non-participating” and “participating.”

“Non-participating preference” is the most Founder/Shareholder friendly form of liquidation preference. It protects the Investor against lower exits and is fairer for all shareholders at higher exit valuations. In the event of a sale or winding up of a company, the Investors will receive their preference amount first (typically an amount equal to their initial investment or a multiple of their initial preference plus any accrued but unpaid dividends) and then the Founders and other shareholders will share in the balance.

For example, a company raises £5M in A Series A investment for a 30% stake in the Company from Investors. The Series A Shares carry a x1.5 preference. The Company is sold for £10M. The consideration from the sale would be distributed as follows: 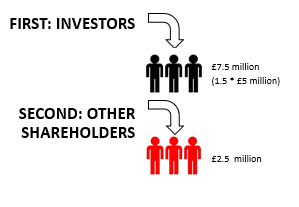 Taking the above example again, if the sale proceeds are £100M, it makes no sense for an Investor to remain in preferred shares as his return would be capped at £7.5M allowing the Founders and other shareholders to share in the balance of £92.5M. In this example, the Investor would convert his preferred shares into ordinary which would entitle him to receive £30M (his pro rata share) of the £100M.

Founders should be aware that where a company has had multiple rounds of financing, the individual economics of each class of share and the exit values will determine at what stage each class of share converts. This can also result in protracted negotiations between the Investors around the time of sale of the company.

As a very basic example, assume a company has the following capital structure:

If the company sells for £11M and assuming that none of the Investors convert into ordinary shares the consideration will be distributed as follows:

This can result in the need for incredibly complex spreadsheets, which will model several different scenarios over a number of different outcomes. Again, it is suggested that you model this at the term sheet stage.

A “participating” preference (sometimes referred to as a ‘double-dip’) maximises an Investor’s upside as well as protects its downside in an exit situation. With a “participating” preference, on a sale or winding up of the Company, the Investor would receive (i) their preference amount first together with any accrued but unpaid dividends (exactly the same as with a “non-participating preferred”) and then (ii) an amount equal to its pro rata share of the remaining proceeds.

For example, a company raises £5M in a Series A investment for a 30% stake in the company from Investors. The Series A Shares carry a x1.5 preference. The Company is sold for £10M. The consideration from the sale would be distributed as follows: 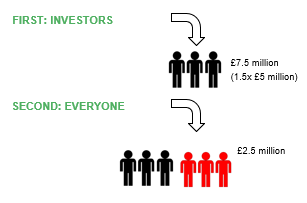 The Investor’s total total share would be £8.25M (£7.5M in liquidation preference plus its 30% share of £2.5M). If the Series A Shares had been “non-participating” the Investor’s share would only be £7.5M.

As mentioned in the previous post, the amount and the structure of the liquidation preference is essentially a function of risk. Investors also justify the use of a “participating” preferred to ensure that Founders will try not to exit a company too early. For example, if a company raises £5M for a 30% stake by issuing preferred shares carrying a x1 non-participating preference and that company exits for £12M 12 months later, the Investor would get its money back and the Founders would receive £7M. This would be unacceptable to the Investor. By insisting upon a “participating” preferred it is argued that the Founders would be less incentivised to sell out at lower values. However, this argument does not hold together where the company is sold for a high price. At higher exit values, the Investors have no incentive to convert (as with the “non-participating” preference) and therefore the “participating preference” can greatly enhance their returns.

If Investors insist on a “participating” liquidation preference, Founders should try to negotiate for a cap on the amount the Investor will receive. A cap limits the amount to paid to the Investors through the liquidation preference. The cap is typically a multiple of the original investment, i.e. two times or three times. Once an Investor has received the cap amount, they do not participate with the other shareholders. At higher outcomes this forces the Investor to convert his shares to ordinary shares and to participate with all of the other shareholders. Again the calculations can be pretty complex and companies are advised to model a series of outcomes. Modeling the comparison between the liquidation preference and conversion is also useful as it gives a clear indication as to the minimum return an Investor is seeking and at what value a company has to achieve to exceed everyone’s expectations.